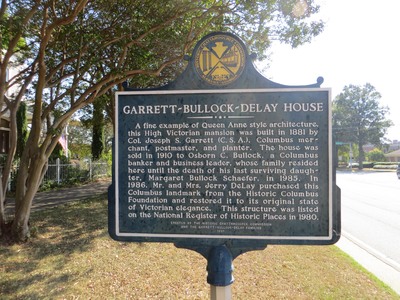 The marker reads: "GARRETT-BULLOCK-DELAY HOUSE A fine example of Queen Anne style architecture, this High Victorian mansion was built in 1881 by Col. Joseph S. Garrett (C.S.A.)., Columbus merchant, postmaster, and planter. The house was sold in 1910 to Osborn C. Bullock, a Columbus banker and business leader, whose family resided here until the death of his last surviving daughter, Margaret Bullock Schaefer, in 1985. In 1986, Mr. and Mrs. Jerry DeLay purchased this Columbus landmark from the Historic Columbus Foundation and restored it to its original state of Victorian elegance. This structure was listed on the National Register of Historic Places in 1980. ERECTED BY THE HISTORIC CHATTAHOOCHEE COMMISSION AND THE GARRETT-BULLOCK-DELAY FAMILIES 1991"