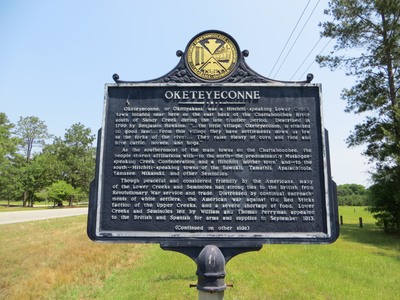 The marker reads: "OKETEYECONNE Oketeyeconne, or Okitiyakani, was a Hitchiti-speaking Lower Creek town located near here on the east bank of the Chattahoochee River south of Sandy Creek during the late frontier period. Described in 1799 by Benjamin Hawkins, “. . . the little village, Oketeyeconne, is situated on good land . . . From this village they have settlements down as low as the forks of the river . . . They raise plenty of corn and rice and have cattle, horses, and hogs.” As the southernmost of the main towns on the Chattahoochee, the people shared affiliations with -- to the north -- the predominantly Muskogee-speaking Creek Confederation and a Hitchiti ´mother town’ and -- to the south -- Hitchiti-speaking towns of the Sawokli, Tamathli, Apalachicola, Yamasee Mikasuki, and other Seminoles. Though peaceful and considered friendly by the Americans, many of the Lower Creeks and Seminoles had strong ties to the British from Revolutionary War service and trade. Distressed by continual encroachments of white settlers, the American war against the Red Sticks faction of the Upper Creeks, and a severe shortage of food, Lower Creeks and Seminoles led by William and Thomas Perryman appealed to the British and Spanish for arms and supplies in September 1813. (Continued on other side)" Top of the sign: Historic Chattahoochee Commission Alabama-Georgia emblem