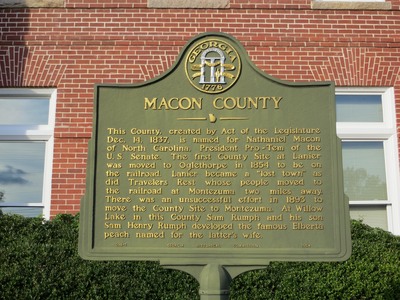 The marker reads: "MACON COUNTY This County, created by Act of the Legislature Dec. 14, 1837, is named for Nathaniel Macon of North Carolina, President Pro-Tem of the U.S. Senate. The first County Site at Lanier was moved to Oglethorpe in 1854 to be on the railroad. Lanier became a “lost town” as did Travelers Rest whose people moved to the railroad at Montezuma two miles away. There was an unsuccessful effort in 1893 to move the County Site to Montezuma. At Willow Lake in this County Sam Rumph and his son Sam Henry Rumph developed the famous Elberta peach named for the latter’s wife. 096-1 GEORGIA HISTORICAL COMMISSION 1954" Top of sign: The Great Seal of Georgia – Georgia 1776 Constitution Justice Wisdom Moderation