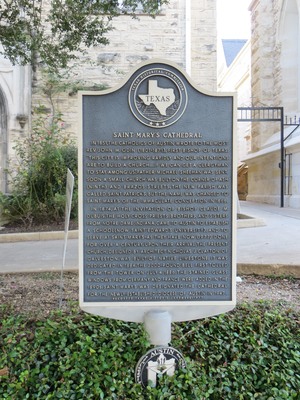 The marker reads: "SAINT MARY'S CATHEDRAL In 1851, the Catholics of Austin wrote to the Most Rev. John M. Odin (1801-1871), first Bishop of Texas. “This city is improving rapidly and our intentions are to build a church…if we can get a clergyman to stay among us.” Father Michael Sheehan was sent. Soon a small church was built on the corner of Ash (Ninth) and Brazos streets. The new Parish was called Saint Patrick’s, but the name was changed to Saint Mary’s of the Immaculate Conception in 1866. In 1874, at the invitation of Bishop Claude M. Dubuis, the Holy Cross priests, brothers, and sisters from Notre Dame, Indiana, came to Austin to establish a school (now Saint Edward’s University), and to serve at Saint Mary’s – as they have now (1977) done for over a century. Upon their arrival, the present church, designed by architect Nicholas J. Clayton of Galveston, was built of native limestone. It was dedicated in 1884. The 2000-pound bell first tolled from the tower on July 4, 1886. The stained glass windows from Germany and France were added in the 1890s. Saint Mary’s was designated the cathedral for the newly-established Diocese of Austin in 1947. RECORDED TEXAS HISTORIC LANDMARK - 1977" Top of sign: Texas Historical Commission emblem