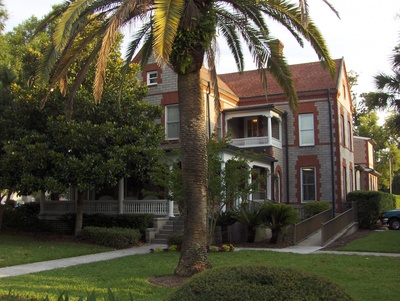 Flagler College Business Services 20 Valencia St. St Augustine, FL. This uniquely styled two-and-a-half story house was built and probably designed by James McGuire and Joseph McDonald, the builders of the Hotel Ponce de Leon. Its gray concrete veneer and red brick quoins and window surrounds are intended to echo the stylistic motifs of the adjacent hotel, although the house's steep-pitched, gabled roof is distinctly different from the gently-sloping barrel tile roof of the hotel. The porch has round columns and Victorian balusters, with dentils at the roof line.
The building was erected as a home for the manager of the Hotel Ponce de Leon, Osburn D. Seavey. In addition to his duties with Flagler's principle hotel, Seavey also supervised the Alcazar Hotel and its entertainment casino, as well as various entertainments and sports for the amusement of guests.
Flagler College acquired the house in the early 1970s.