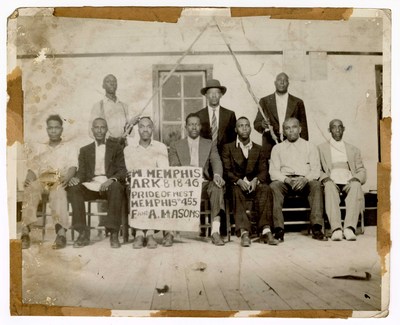 Image of seven men sitting in with three men standing behind them. Two of the men standing are holding poles angled toward the center of the picture and cross each other at the top. Two men sitting are holding a sign. Sign: W. MEMPHIS ARK. 8. 18.46. PRIDE OF WEST MEMPHIS #455 F. and A. MASONS. Date: 8/18/1946. One of 156 black and white photographs by R. Lee Thomas, an African American photographer active in the early twentieth century in the southern United States. Thomas’ work provides photographic documentation of southern black social life, primarily religious and labor groups, circa 1946-1949. The majority of the photographs depict groups from Birmingham, Alabama, and adjacent areas. His imprint contains the caption: Made by R. Lee Thomas, Mound Bayou, Mississippi, The Oldest Negro Town in America.