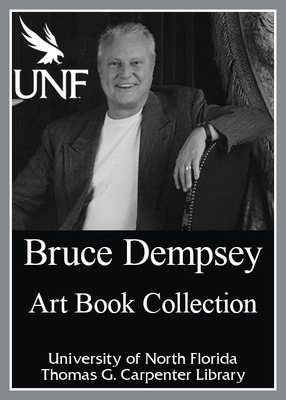 Bruce H. Dempsey was former director of the Jacksonville Art Museum from 1974 to 1993. In 1985, in cooperation with the Egyptian Museum in Cairo, Egypt, Mr. Dempsey brought to Jacksonville the preeminent, national traveling exhibition “Ramses II the Pharaoh and his Time” consisting of over nine tons of sculpture and artifacts from the Egyptian Museum collection. Throughout his career, Mr. Dempsey worked closely with many of America’s leading artists associated with many major New York galleries and The Metropolitan Museum of Art, enabling him to curate major exhibitions of notable artists such as Helen Frankenthaler, James Rosenquist, Robert Rauschenberg, and Frank Stella. Many of the books included in his donation to the Thomas G. Carpenter Library were personal gifts from the artists. The acquisition of these library materials will ensure that future generations of UNF students, faculty, and visiting scholars have important resources to support their scholarship and learning.

1974 - 1976 - Advisory Board to the Florida Arts Council, Division of Cultural Affairs

1980 - Art advisor to the Florida House of Representatives

1986 - 1987 - Executive Director of Ramses II, The Pharaoh and His Time, Treasures from the Egyptian Museum, Cairo, Egypt

1987 - Governor's Award for Service and Dedication to the Arts, State of Florida