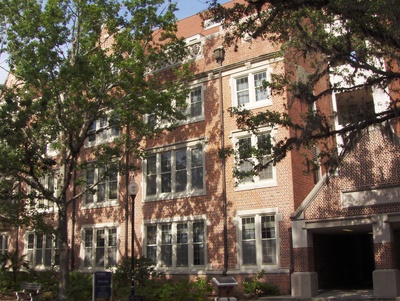 Rolfs Hall UF 3, Gainesville, FL. Rolfs Hall was completed in 1927. Originally called the Horticulture Building, it was designed by campus architect Rudolph Weaver in the Collegiate Gothic style that characterized other UF buildings at that time. A striking parapet with alternating quatrefoils and lozenges is among the building`s decorative details. In addition to classrooms, the Horticulture Building housed the State Plant Board, the Agricultural Extension Service, the Agricultural Experiment Station, and the extensive UF Herbarium. In the 1950s, the Rolfs Hall was named for Peter Henry Rolfs, a dean of the College of Agriculture and Director of the Agricultural Experiment Station. In the late 1990s an extensive, exterior stairwell was added at the south. - Rolfs Hall was added to the National Register in 1986. It is a part of the University of Florida Campus Historic District, a collection of buildings added to the National Register as an historic district in 1989.