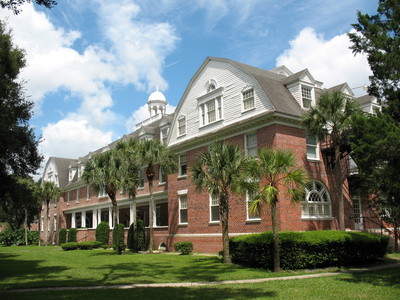 Stetson Chaudoin Hall , Deland, FL. This three-story residence hall was built in 1892 and expanded in 1894. It was named for W.N. Chaudoin, former university trustee and past president of the Florida Baptist Convention, with which Stetson University was affiliated in the past. Major donors were John B. Stetson and C.T. Sampson, a university trustee. In 1935, another wing was added. Notable architectural features are a cupola within a balustrade on the crown of the roof and a large front veranda with a fan and sidelights over the entrance.