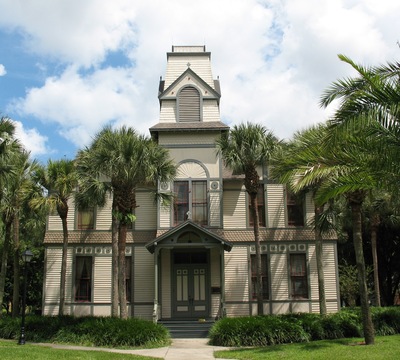 Stetson Deland Hall. The city of DeLand, the home of Stetson University, was founded in 1876 by Henry DeLand, a chemical manufacturer from the state of New York. Preparations for opening the university began in the summer of 1883. DeLand Hall, built in 1884 as the first building of what would become Stetson University. It is a wood-frame Second Empire style building, with a mansard roof and a three-story bell tower that rises above the central entranceway. Until two years later, when Stetson Hall was erected, DeLand Hall was the only campus building and contained the entire school. Since then, DeLand Hall was restored in 1981, and placed on the National Register of Historic Places in 1983 NRIS #83001441 . It was restored again in 2002, and is in excellent condition.