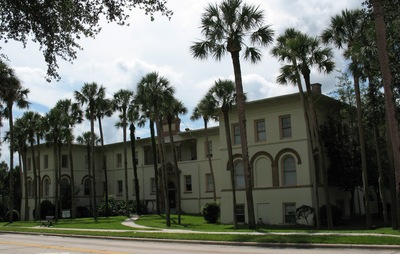 Stetson Flagler Hall, Deland FL. Flagler Hall was financed by railway magnate Henry M. Flagler. After his death in 1913, the three-story classroom building was renamed in his honor.
Flagler himself dictated its Mediterranean style, which he used for several other projects in St. Augustine and Palm Beach. Flagler Hall was the home of Florida's first law school, which remained there until World War II, when it was temporarily closed.
Renovated in 1979, thanks to a gift of Flagler's granddaughter, Jean Flagler Matthews, it is in excellent condition.
Contributing Building - Stetson University Campus Historic District - National Register of Historic Places
NRIS 91000244. It was built in ca 1902, designed by architect: William Charles Hays.