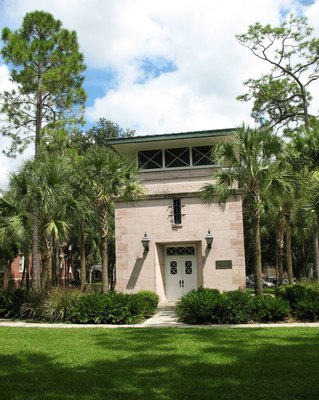 Stetson Hulley Tower, Deland, FL. Completed in 1934, the 116-foot Hulley Tower originally contained an 11-bell carillon, and a mausoleum for Stetson's second president, Lincoln Hulley, and his wife Eloise. Hulley served as president for 30 years (1904-34), and he and his family built the tower as a gift to the university. He died before it was finished.
The Eloise Chimes were first housed in Elizabeth Hall's cupola, but were moved when Hulley Tower was built. They consisted of 11 rough cast bells, four large and seven smaller ones, ranging from 3,000 to 575 pounds, hung from an all-steel structure 106 feet high. They were played with wooden handles, each attached to a bell by a system of pulleys, wires and leather straps. The playing platform was located on the tower's second level, open to the air and reached by a narrow stone staircase. A series of iron ladders lead to the bells, that was also open to the air.
The tower was renovated in 1986.
Contributing Building - Stetson University Campus Historic District - National Register of Historic Places
NRIS #91000244