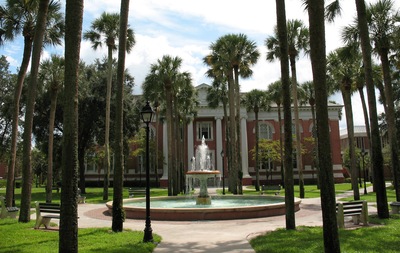 Stetson Sampson Hall, Deland, FL. Built in 1908 at a cost of $40,000, Sampson Hall was financed by steel magnate and philanthropist Andrew Carnegie, with a matching gift of $40,000 from Mrs. John B. Stetson for endowment. Designed by Henry John Klutho, the first Floridian to earn membership in the American Institute of Architects, it shows the conservative Neoclassicism found in many Carnegie libraries across the United States. It was later renamed Sampson Hall to honor C.T. Sampson, a university trustee, who had contributed over the years to Stetson's library fund and left an additional $20,000 for a library endowment when he died in 1893. Stetson was the first university in Florida to employ a full-time librarian.
The two-story brick landmark is one of the few Klutho buildings remaining in Florida, making it a significant part of Florida's architectural heritage.
Contributing Building - Stetson University Campus Historic District - National Register of Historic Places
NRIS 91000244