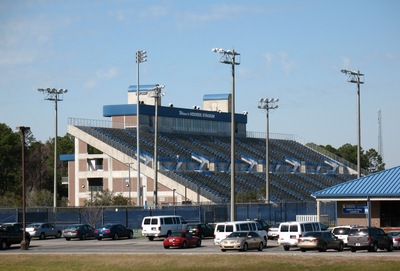 UNF Hodges Stadium, Jacksonville, FL. Hodges Stadium is a multi-purpose stadium at the University of North Florida (UNF), and the home field for the North Florida Ospreys soccer, track and field, and cross country teams. It is located on the university's campus in Jacksonville, Florida, U.S. It is named for George and Kernan Hodges.
The stadium opened in 2004 and underwent renovations in 2006 and 2008 that installed additional seating, a press box, and a 9-lane Olympic quality running track. The facility additionally includes classrooms, offices, and the Browning Athletic Training and Education Center. Following the completion of the current track, it became one of seven facilities in the U.S. certified by the International Association of Athletics Federations (IAAF), allowing it to host all NCAA and IAAF events within its grounds. In addition to its use by UNF the stadium has become a center for rugby league football, serving as home field for the Jacksonville Axemen of the USA Rugby League (USARL), and hosting several international matches and training camps.