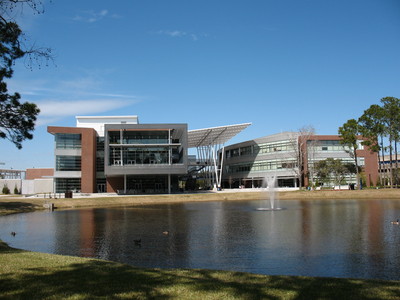 UNF Student Union 2, Jacksonville, FL. UNF Student Union, Jacksonville, Fl. The Student Union is the student activity center at the University of North Florida (UNF) in Jacksonville, Florida, U.S. The first such building in UNF's history, it opened in 2009. It is located on the university's campus across from UNF Arena. On April 18, 2012, the AIA's Florida Chapter ranked UNF's Student Union fourth on its list of Florida Architecture: 100 Years. 100 Places.
UNF's Student Union consists of two buildings connected by a covered walkway known as Osprey Plaza. The structure includes contains the UNF bookstore, a convenience store, restaurants, a game room, an auditorium, a ballroom, Community First bank branch, an LGBT Resource Center, and an amphitheater. UNF student government is housed there, as is the Center for Student Media, which includes UNF's student newspaper The Spinnaker, Osprey Television, and Osprey Radio. The Lufrano Intercultural Gallery of Art and other various student organizations like Greek Life have their offices in the facility. The Boathouse restaurant is the third variant of the UNF tradition. The food court has Quiznos, Salsarita's, Coyote Jack's, and Chick-N-Grill. Market Days are held each Wednesday in Osprey Plaza and feature vendors from the region.
It is the First Leadership in Energy and Environmental Design (LEED) certified student union in Florida. The facility cost $50.4 million & The Coxwell Amphitheater has a capacity of 6,000 people.