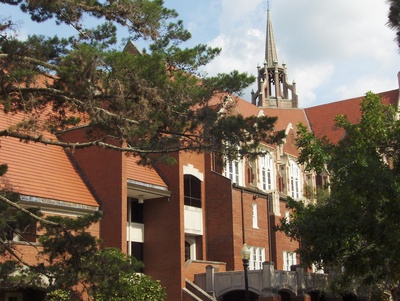 University Auditorium UF, Gainesville, FL. The University Auditorium, originally known as the Memorial Auditorium and sometimes called the University of Florida Auditorium, is a historic building on the campus of the University of Florida in Gainesville, Florida, in the United States. It was designed by William Augustus Edwards in the Collegiate Gothic style and was built between 1922-1924. It was restored and expanded in 1977 by architect James McGinley. The expansion, which added a new entrance and lobbies, was designed to complement but not match the original architecture. It is a contributing property in the University of Florida Campus Historic District which was added to the National Register of Historic Places on April 20, 1989.
The University of Florida Auditorium today is a performing arts venue which seats up to 843 people. It has a concert stage, and is used for musical concerts, lectures, convocations, and pageants. Its director is Michael Blachly.
The Auditorium is also home to the Anderson Memorial Organ. Donated in 1925, the organ has since been expanded and improved with the installation of additional pipes and a five manual console, making it one of the major instruments of its kind in the Southeast.
Contributing Building - University of Florida Campus Historic District - National Register of Historic Places
NRIS #89000322