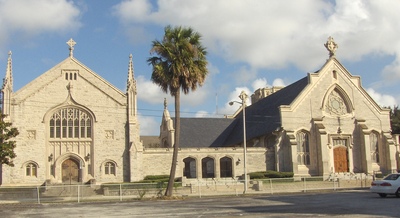 St John's Cathedral located in Jacksonville, Florida was built in 1906 in the Gothic Revival architectural style. This is the third sanctuary for this Episcopal church. The first church was built in 1842 and burned during the Civil War. The second church was built in 1877 and burned during the Great Fire of 1901. Included in this image is a view of the Taliaferro Memorial Building which was built between 1923-1924. James P. Taliaferro donated the funds to build the Sunday School building for St. John's Cathedral, in memory of his wife.