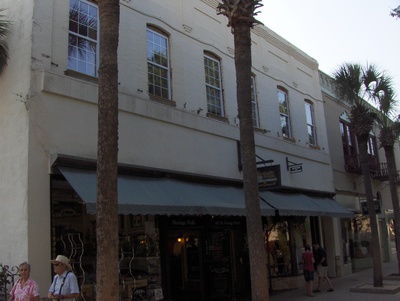 158-162 St George St. Augustine, Fl. St. Augustine (Spanish: San Agustín) is a city in Northeast Florida and the oldest continuously occupied European-established settlement and port in the continental United States. The county seat of St. Johns County, San Agustín was founded in September 1565 by Spanish admiral Pedro Menéndez de Avilés, and subsequently served as the capital of Spanish Florida for two hundred years. It remained the capital of the Florida Territory until it was moved it to Tallahassee in 1824. Since the late 19th century, its historical character has made the city a major tourist attraction.

This is a commercial building in the historic district of St Augustine, which houses stores like the Heritage Walk, and many others and business offices and eating places that attract lot of tourists.