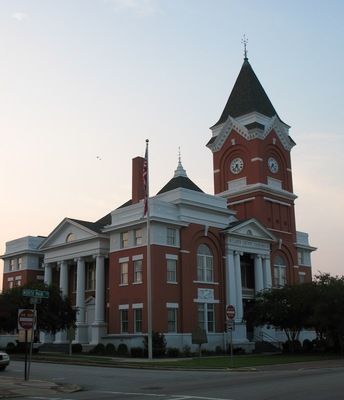 he Bulloch County courthouse is located in Statesboro, Georgia. It was built in 1894 and renovated in 1914 in the Queen Anne and Classical Revival architectural styles. Throughout the years the courthouse went through many renovations that utilized different colors of brick, which might be why the exterior of the courthouse was coated with white plaster. By the 1990s the county commission decided to restore the courthouse to its original condition. The restoration began in 1998 and was completed in 2000. The white plaster that was not removed was painted a red brick color. The courthouse was originally designed by Bruce and Morgan in 1894 and renovated by Edward Columbus Hosford in 1914. It is on the National Register of Historic Places (NRIS #80000978).