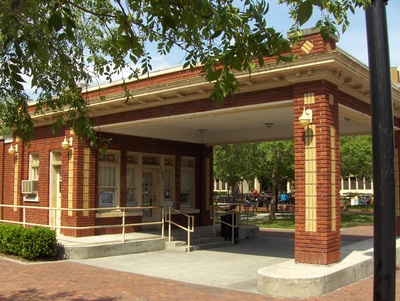 Bethel Gas Station, Gainesville, Fl. This 1920s gas station was relocated to its present location at the Community Plaza in downtown Gainesville, Florida, in 1987. Built in its in its Renaissance Revival style, this gas station remains one of the few relatively unaltered service stations from the 1920s.

The gas station building, constructed in 1925, was known as the Bethel Station Building. The building was moved to its present location in 1987 to serve as a public transit ticket building. In 2007, the ticketing operation ceased and the building sat vacant for awhile.