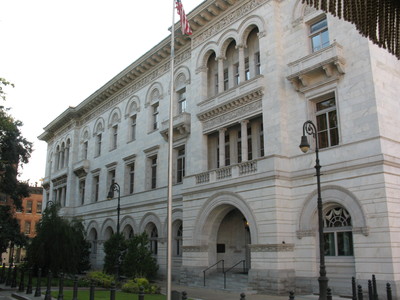 The Federal Building and United States Courthouse is located in Savannah, Georgia. It was built between 1894-1899 primarily as a U.S. Post Office. It was also home to the U.S. courthouse and other federal agencies. The building was enlarged between 1930-1932. Designed in the Second Renaissance Revival style, the original portion of the building is constructed entirely of white Georgia marble, and features Italianate tripartite facade divisions characteristic of the style. It was designed by Jeremiah O'Rourke. In 1999, the U.S. post office vacated the building and today, the building serves as offices for the U.S. District Court and Court-related functions. In 2005, the building was renamed Tomochichi Federal Building and U.S. Courthouse. It is listed on the National Register of Historic Places (NRIS #74000663).