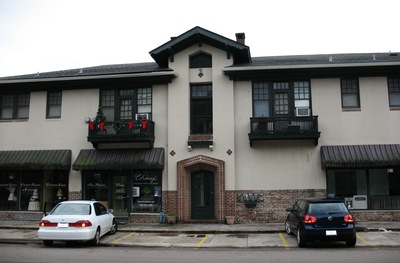 Delgado Building, Jacksonville, Fl. The Delgado Building, 2544 Oak Street, a mixed-use Prairie-style building constructed in 1919 in the Riverside neighborhood. Earl Mark and Leeroy Sheftall collaborated on several memorable Prairie-style buildings in Jacksonville's historic neighborhoods. Both men apprenticed in the office of Henry John Klutho, one of Florida's greatest architects, who came to Jacksonville following the great fire of 1901. Mark and Sheftall started their own firm in 1911 and were in partnership for twenty-two years.

The Delgado features retail store-fronts at street level like Choux Cake Studio- known for its cakes and cup cakes, and apartments above. It was constructed for Shefftall's mother-in-law, Delores Delgado.