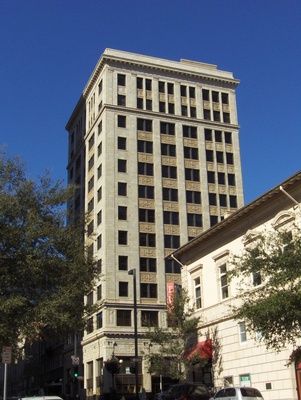 Greenleaf & Crosby Company planned to erect a six-story building on the northwest corner of Laura and Adams Street. The building was to have been designed in such a manner that it could be expanded to twelve stories at a later date. This shows the twelve storied building, in a different view. The Laura and Adams street facades are extensively decorated with terra-cotta panels depicting griffins, eagles, urns, and floral motifs. The lower facade is highlighted by engaged pilasters and a grand two-story vaulted entrance. The building is well maintained and is one of the finest downtown works of Marsh and Saxelbye.