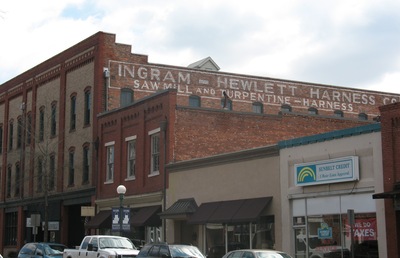 In 1911 Ingram-Hewlett was located at 113-115 West Central Avenue. Their lettering on the rear of the building can still be seen from the downtown merchants’ parking lot.

The structural brick building was built around the turn of the century and consists of 3 8,000 square foot floors. Over the years the building has been home to a myriad of businesses including the Stewart Candy Co. and a funeral home. It also served as the headquarters for Company “E” of the 121st Infantry Georgia National Guard.

After being abandoned for several years ASA Engineering & Surveying, Inc. sought to renovate 4,000 square foot of the bottom floor for his company’s use. ASA Engineering and Surveying, Inc., Metro Water Supply, Inc., Azalea Health Innovations, Jessie’s Eats and Treats, and 109 Central Clothing Boutique inhabit the bottom floor of the Ingram-Hewlett building. On the second floor is a fitness facility and storage space for ASA. The 8,000 square foot third floor is home to ASA's founder Albert Slone and his family.