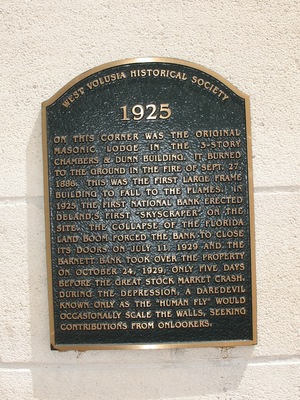 An historical marker by the West Volusia Historical Society placed on the former First National Bank of DeLand building. The former First National Bank of DeLand is located in DeLand, Florida. It was built in 1924 in the Masonry Vernacular architectural style with Classical Revival influences. It was DeLand's first skyscraper and contained 28 offices, five stores and the bank. The bank closed in 1929. This is a contributing building on the National Register of Historic Places and a part of the Downtown DeLand Historic District.

On this corner was the original masonic lodge in the 3-story Chambers & Dunn building. It burned to the ground in the fire of Sept 27, 1866. This was the first large frame building to fall to the flames. In 1925, the first national bank erected Deland's "first skyscraper" on the site. The collapse of the Florida land boom forced the bank to close its doors on July 11, 1929 and the Barnett Bank took over the property on October 24, 1929, only five days before the Great Stock Market crash. During the depression, a daredevil known only as "the human fly" would occasionally scale the walls, seeking contributions from onlookers."