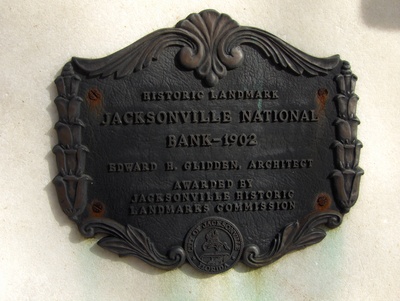 Plaque on the former Jacksonville National Bank denoting its status as a historic landmark by the Jacksonville Historic Landmarks Commission. The bank is located in Jacksonville, Florida. It was built in 1902 in the Neo-Classical Revival architectural style and designed by Edward H. Glidden. The building was renovated in 1916 by Mobray and Uffinger. It opened in 1902 as the Merchantile Exchange Bank and a few years later was purchased by the Florida National Bank. The facade of the building and its columns were made of marble, hence the local nickname, the Marble Bank. By the 1970's, the owner of the building was the Jacksonville National Bank. This now abandoned building is part of the Laura Street Trio (Bisbee Building, Florida Life Building, Old Florida National Bank).