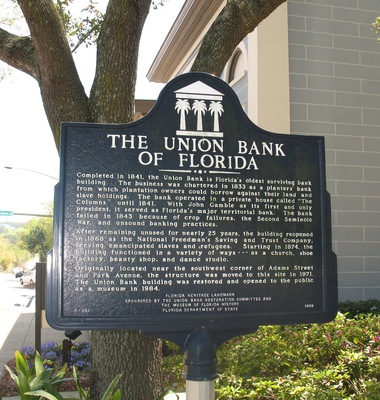 Historical marker for the former Union Bank located in Tallahassee, Florida. Built in 1841 to serve the plantation owners, it closed in 1843 due to a variety of factors. After the Civil War, it reopened as Freedman's Savings and Trust Company. The building has also functioned as a church, beauty shop, locksmith, dance studio, coffee shop, and art studio. The building is currently home to Southeastern Regional Black Archives, Research Center and Museum. It is also known as the Capitol Complex Extension Branch of the Southeastern Regional Black Archives. It is on the National Register of Historic Places (NRIS #71000242).

Completed in 1841, the Union Bank is Florida's oldest surviving bank building. The business was chartered in 1833 as a planter's bank from which plantation owners could borrow against their land and slave holdings. The bank operated in a private house called "The Columns" until 1841. With John Gamble as its first and only president, it served as Florida's major territorial bank. The bank failed in 1843 because of crop failures, the Second Seminole War, and unsound banking practices.

After remaining unused for nearly 25 years, the building reopened in 1868 as the National Freeman's Saving and Trust Company, serving emancipated slaves and refugees. Starting in 1874, the building functioned in a variety of ways--as a church, shoe factory, beauty shop, and dance studio.

Originally located near the southwest corner of Adams Street and Park Avenue, the structure was moved to this site in 1971. The Union Bank building was restored and opened to the public as a museum in 1984.

Florida Heritage Landmark. Sponsored by The Union Bank Restoration Committee and the Museum of Florida History. Florida Secretary of State.