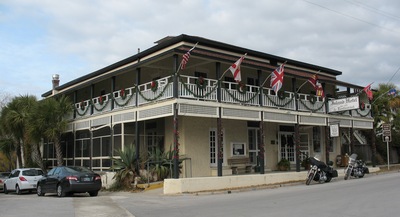 The Island Hotel and Restaurant is located in Cedar Key, Florida. Built between 1859-1860, it originally opened as Parson and Hale's General Store. It is believed that by 1884, the upper level of the store had a restaurant and furnished rooms. By 1915, the property had been renovated and opened as the Bay Hotel. The hotel was named the Island Hotel in 1946. This is on the National Register of Historic Places (NRIS #84000252).