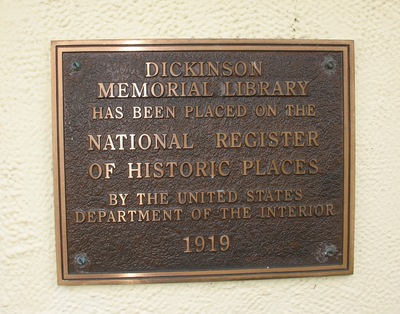 The Orange City Library was organized at the DeYarman house in 1879, and its books were located in a number of stores and other buildings. The Dickinson Memorial Library took them over in 1971. It was named for Dr. Frances Dickinson. It still serves the city and was dedicated in 1919. It has been placed in the National Register of Historic Places NRIS #95000020.

This plaque was placed on the front of the library in 1919. It reads as - Dickinson Memorial Library has been placed on the National Register of Historic places by the United States Department of the Interior.