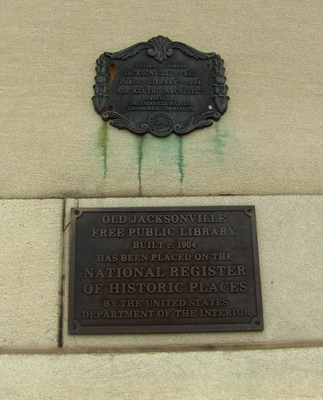 It was designed by architect Henry John Klutho in the Neo-Classic Revival style, the library was two stories tall, made of limestone and copper. Its design was Greek Ionic, typical of Carnegie libraries, and featured four columns on the facade. It has been described as nearly fireproof, with wood only in the floors, doors and sash. Today it houses a law firm and is on the National Register of Historic Places NRIS #86003679.

This is the plaque on the building wall which reads as -- " Old Jacksonville Free Public Library, built 1904, has been placed on the National Register of Historic places by the United States Department of the Interior."