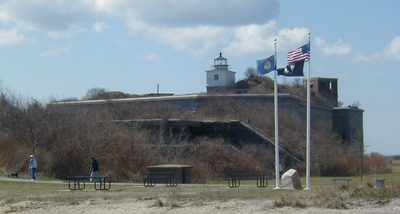 The Clarks Point Lighthouse is located in New Bedford, Massachusetts. The first wooden lighthouse was built in 1797 which later burned. A newer tower was built in 1804. Fort Taber was constructed next to the lighthouse in 1863. The current tower was built in 1869. The light was deactivated from 1898. The city of New Bedford renovated the fort and the tower during the 1990's. It was reopened in 2001 with the tower in use as a private aid to navigation. This is a contributing building on the National Register of Historic Places (NRIS #73001954).