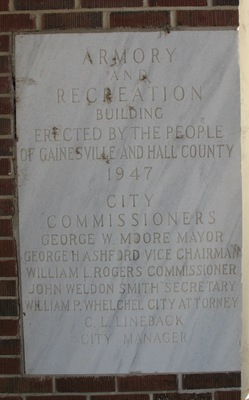 This Armory and Recreation Center Building was erected in 1947, on the North Green Street, by the citizens of Gainesville and Hall County. Currently it houses the Gainesville Civic Center.

This is the cornerstone on the building which says that it was erected in 1974 by the people of Gainesville and Hall County. It also lists the names of the City Commissioners , Mayor, Vice Chairman Secretary and City Attorney at that time.