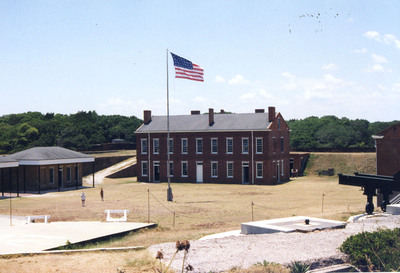 Fort Clinch is on A1A at the north end of Amelia Island, three miles north of Fernandina Beach. Construction of a fort, later named Fort Clinch, was begun in 1847. A pentagonal brick fort with both inner and outer walls, Fort Clinch was a safe haven for blockade runners during the Civil War. The fort was used in 1898 during the Spanish-American War, but was abandoned until the Civil Conservation Corps (CCC) restored it in the 1930s.

It is part of the Fort Clinch State Park, and is one of the most well-preserved 19th century forts in the country. The fort was placed on the National Register of Historic Places NRIS #72000343, in 1972.