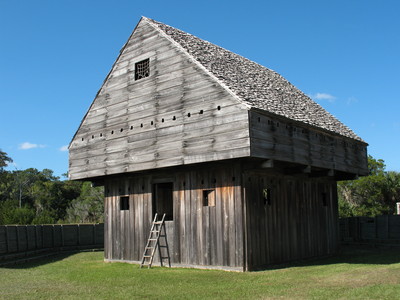 Fort King George (1721-1734) - A British colonial fort established in 1721 by British troops commanded by Colonel John Barnwell. It was named after British King George & abandoned in 1734.

Originally built as a small triangular fort on a bluff above the north branch of the Altamaha River. The main structure was a three story 26' square blockhouse that provided protection for the residents. There were other buildings like barracks, officers quarters, latrine and the whole complex was surrounded by a moat. The blockhouse also mounted cannons on the second floor for firing at any enemy. This is a duplicate of the original structure.