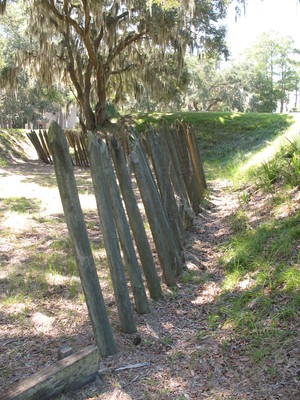 Fort McAllister Defense GA. Fort McAllister was a Confederate earthwork fortification near the mouth of the Ogeechee River in Bryan County. The fort played an important role in the defense of Savannah during the Union navy blockade of the Georgia coast.

Built in 1861 at Genesis Point, the fort was constructed on the plantation of Lieutenant Colonel Joseph Longworth McAllister, for whom it was named. Fort McAllister provided protection from the U.S. Navy for the southern flank of Savannah, about fifteen miles to the north, during the Civil War (1861-65). The Georgia Historical Commission has greatly expanded the park and the fort and is now Georgia State Park.