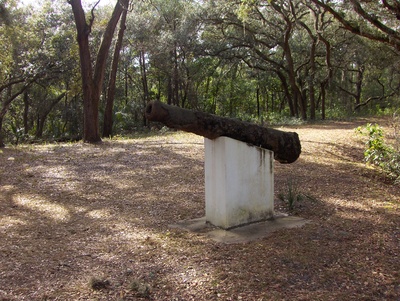 The Yellow Bluff Fort is located near the mouth of the St. Johns River. This site was an important military position during the Civil War, allowing access to the inland areas of Florida's east coast. There was never an actual fort on Yellow Bluff, but an encampment that was fortified and equipped with large guns for protection. Constructed in 1862, the site was occupied by both Confederate and Union troops during the Civil War and-at its peak-housed over 250 soldiers. There is no visitor center, no staff, nor facilities, but there are cannons and a monument to Confederate troops.

The park features a number of corroded cannons that were probably already antiques by the time of the Civil War.