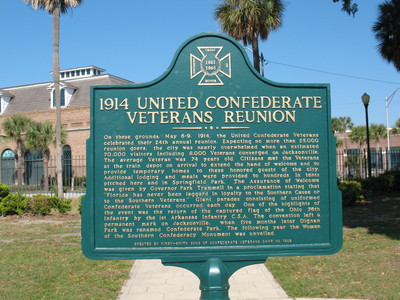 This marker is in the Confederate Park, which was earlier called the Dignan Park, in the Springfield Historical District, Jacksonville ,Florida, where the United Confederate Veterans celebrated their 24th reunion in 1914.

"On these grounds, May 6-9, 1914, the United Confederate Veterans celebrated their 24th annual reunion. Expecting no more than 25,000 reunion goers, the city was nearly overwhelmed when an estimated 70,000 visitors including 8,000 Veterans converged on Jacksonville. The average Veteran was 74 years old. Citizens met the Veterans at the train depot on arrival to extend the hand of welcome and to provide temporary homes to these honored guests of the city. Additional lodging and meals were provided to hundreds in tents pitched here and in Springfield Park. The Assurance of Welcome was given by Governor Park Trammell in a proclamation stating that "Florida has never been laggard in loyalty to the Southern Cause or to the Southern Veterans." Giant parades consisting of uniformed Confederate Veterans occurred each day. One of the highlights of the event was the return of the captured flag of the Ohio 76th Infantry by the 1st Arkansas Infantry C.S.A. The convention left a permanent mark on Jacksonville, when five months later Dignan Park was renamed Confederate Park. The following year the Women of the Southern Confederacy Monument was unveiled."