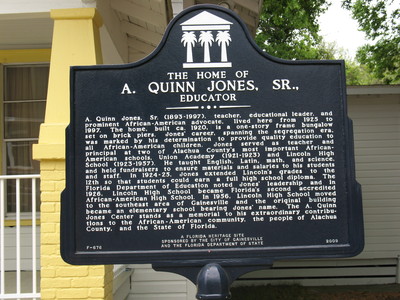 The A. Quinn Jones House was listed in the National Register of Historic Places on January 27, 2010, for its importance to Florida State history for its association with the personal and professional life of Allen Quinn Jones, an African-American educator. The house is being renovated and restored to maintain its historic integrity and provide a valuable community center for the neighborhood. The marker was obtained in 2009 from the State of Florida.

An historical marker in front of the house reads:

"A. Quinn Jones, Sr. (1893-1997), teacher, educational leader, and prominent African-American advocate, lived here from 1925 to 1997. The home, built ca. 1920, is a one-story frame bungalow set on brick piers. Jones' career, spanning the segregation era, was marked by his determination to provide quality education to all African-American children. Jones served as teacher and principal at two of Alachua County's most important African-American schools, Union Academy (1921-1923) and Lincoln High School (1923-1957). He taught English, Latin, math, and science, and held fundraisers to ensure materials and salaries to his students and staff. In 1924-25, Jones extended Lincoln's grades to the 12th so that students could earn a full high school diploma. The Florida Department of Education noted Jones' leadership and in 1926, Lincoln High School became Florida's second accredited African-American High School. In 1956, Lincoln High School moved to the southeast area of Gainesville and the original building became an elementary school bearing Jones' name. The A. Quinn Jones Center stands as a memorial to his extraordinary contributions to the African-American community, the people of Alachua County, and the State of Florida."