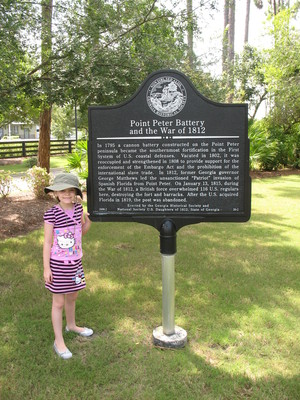 This marker was erected by the Georgia Historical Society & National Society U.S. Daughters of 1812, State of Georgia, at the Spinnaker Road , St Marys, Georgia.

Point Peter Battery and the War of 1812

" In 1795 a cannon battery constructed on the Point Peter peninsula became the southernmost fortification in the First System of U.S. coastal defenses. Vacated in 1802, it was reoccupied and strengthened in 1808 to provide support for the enforcement of the Embargo Act and the prohibition of the international slave trade. In 1812, former Georgia governor George Matthews led the unsanctioned “Patriot” invasion of Spanish Florida from Point Peter. On January 13, 1815, during the War of 1812, a British force overwhelmed 116 U.S. regulars here, destroying the fort and barracks. After the U.S. acquired Florida in 1819, the post was abandoned."