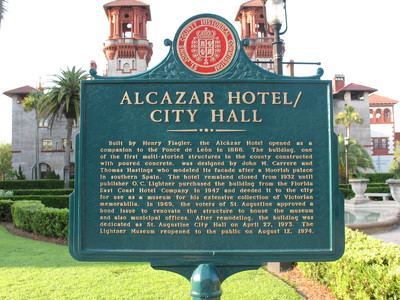 The Alcazar Hotel is a historic hotel building in downtown St. Augustine, Florida, USA. The building now houses St. Augustine City Hall and the Lightner Museum. It was opened in 1888 by Henry Flagler.

" Built by Henry Flagler, the Alcazar Hotel opened as a companion to the Ponce de Leon in 1888. The building, one of the first multi-storied structures in the country constructed with poured concrete, was designed by John M. Carrere and Thomas Hastings who modeled its facade after a Moorish palace in Southern Spain. The hotel remained closed from 1932 until publisher O.C. Lightner purchased the building from the Florida East Coast Hotel Company in 1947 and deeded it to the city for use as a museum for his extensive collection of Victorian memorabilia. In 1969, the voters of St. Augustine approved a bond issue to renovate the structure to house the museum and also municipal offices. After remodeling, the building was dedicated as St. Augustine City Hall on April 27, 1973. The Lightner Museum reopened to the public on August 12, 1974."