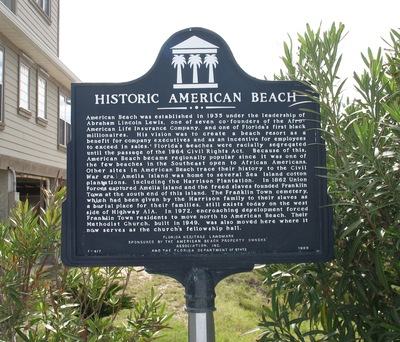 American Beach is located on Amelia Island, just north of Jacksonville, Florida. Founded in 1935 by Abraham Lincoln Lewis, Florida's first black millionaire & president of Afro-American Insurance Company, American Beach was created as a vacation haven for African-Americans, for whom access to other resorts was denied in the days before desegregation.

" American Beach was established in 1935 under the leadership of Abraham Lincoln Lewis, one of seven co-founders of the Afro-American Life Insurance Company, and one of Florida´s first black millionaires. His vision was to create a beach resort as a benefit for company executives and as an incentive for employees to exceed in sales. Florida´s beaches were racially segregated until the passage of the 1964 Civil Rights Act. Because of this, American Beach became regionally popular since it was one of the few beaches in the Southeast open to African Americans. Other sites in American Beach trace their history to the Civil War era. Amelia Island was home to several Sea Island cotton plantations, including the Harrison Plantation. In 1862 Union Forces captured Amelia Island and the freed slaves founded Franklin Town at the south end of this island. The Franklin Town cemetery, which had been given by the Harrison family to their slaves as a burial place for their families, still exists today on the west side of Highway A1A. In 1972, encroaching development forced Franklin Town residents to move north to American Beach. Their Methodist Church, built in 1949, was also moved here where it now serves as the church´s fellowship hall."