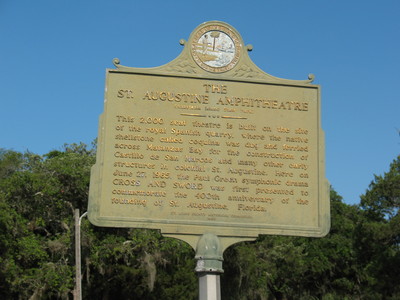 This marker was placed by the St Johns Historical Commission.

" This 2,000 seat theater is built on the site of the royal Spanish quarry, where the native shellstone called coquina was dug and ferried across Mantanzas Bay for the construction of Castillo de San Marcos and many other early structures in colonial St. Augustine. Here on June 27, 1965, the Paul Green symphonic drama CROSS AND SWORD was first presented to commemorate the 400th anniversary of the founding of St. Augustine. There is also an active cache and a virtual cache near this site."