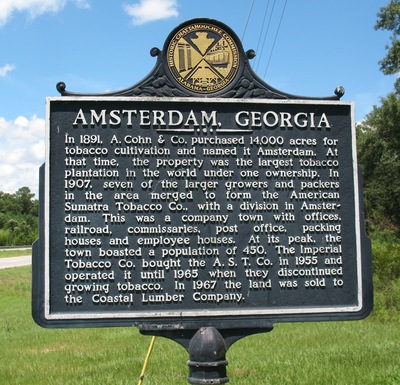 " Amsterdam, Georgia In 1891, A. Cohn & Co. purchased 14,000 acres for tobacco cultivation and named it Amsterdam. At that time, the property was the largest tobacco plantation in the world under one ownership. In 1907, seven of the larger growers and packers in the area merged to form the American Sumatra Tobacco Co., with a division in Amsterdam. This was a company town with offices, railroad, commissaries, post office, packing houses and employee houses. At its peak, the town boasted a population of 450. The Imperial Tobacco Co. bought the A.S.T. Co. in 1955 and operated it until 1965 when they discontinued growing tobacco. In 1967 the land was sold to the Coastal Lumber Company."