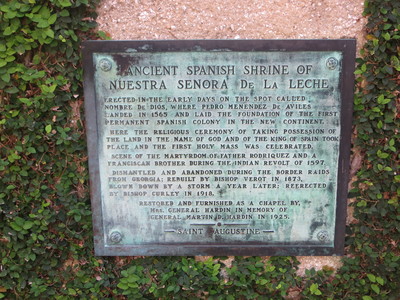 Chapel of Our Lady of La Leche

" Erected in the early days on the spot called Nombre de Dios, where Pedro Menendez de Aviles landed in 1565 and laid the foundation of the first Spanish Colony in the new continent. Here the religious ceremony of taking possession of the land in the name of God and of the king of Spain took place and the first Holy Mass was celebrated. Scene of the Martyrdom of Father Rodriquez and a Franciscan Brother during the Indian Revolt of 1597. Dismantled and abandoned during the border raids from Georgia; Rebuilt by Bishop Verot in 1873, Blown down by a storm a year later; Re-erected by Bishop Curley in 1918."

Restored and furnished as a Chapel by, Mrs. General Hardin in memory of General Martin D. Hardin in 1925.