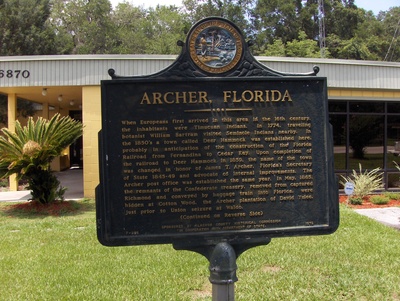 This historical marker is located on the City hall grounds, in Archer, in Alachua County, Florida. It is sponsored by the Alachua County Historical Commission In Cooperation With Department of State

" When Europeans first arrived in this area in the 16th century, the inhabitants were Timucuan Indians. In 1774, traveling botanist William Bartram visited Seminole Indians nearby. In the 1850's a town called Deer Hammock was established here, probably in anticipation of the construction of the Florida Railroad from Fernandina to Cedar Key. Upon completion of the railroad to Deer Hammock in 1859, the name of the town was changed in honor of James T. Archer, Florida's Secretary of State 1845-49 and advocate of internal improvements. The Archer post office was established the same year. In May, 1865, the remnants of the Confederate treasury, removed from captured Richmond and conveyed by baggage train into Florida, were hidden at Cotton Wood, the Archer plantation of David Yulee, just prior to Union seizure at Waldo."