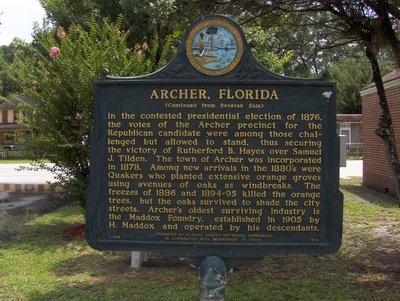 This historical marker is located on the City hall grounds, in Archer, in Alachua County, Florida. It is sponsored by the Alachua County Historical Commission In Cooperation With Department of State.

" In the contested presidential election of 1876, the votes of the Archer precinct for the Republican candidate were among those challenged but allowed to stand, thus securing the victory of Rutherford B. Hayes over Samuel J. Tilden. The town of Archer was incorporated in 1878. Among new arrivals in the 1880's were Quakers who planted extensive orange groves using avenues of oaks as windbreaks. The freezes of 1886 and 1894-95 killed the orange trees, but the oaks survived to shade the city streets. Archer's oldest surviving industry is the Maddox Foundry, established in 1905 by H. Maddox and operated by his descendants. "

Sponsors: Sponsored by Alachua County Historical Commission In Cooperation With Department of State