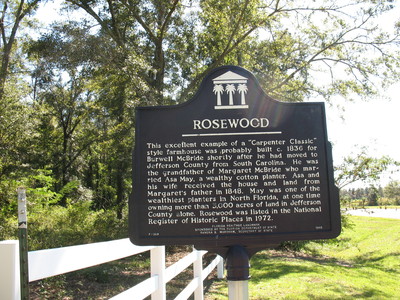 " This excellent example of a "Carpenter Classic" style farmhouse was probably built c. 1836 for Burwell McBride shortly after he moved to Jefferson County from South Carolina. He was the grandfather of Margaret McBride who married Asa May, a wealthy cotton planter. Asa and his wife received the house and land from Margaret's father in 1848. May was one of the wealthiest planters in North Florida, at one time owning more than 3,000 acres of land in Jefferson County alone. Rosewood was listed in the National Register of Historic Places in 1972."