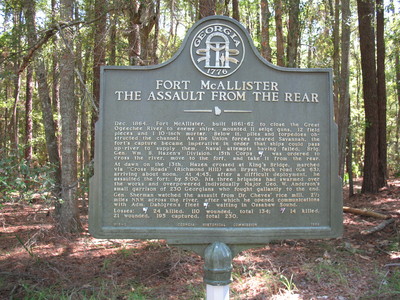 Fort McAllister was a Confederate earthwork fortification near the mouth of the Ogeechee River in Bryan County. It played an important role in the defense of Savannah during the Civil War time Union naval blockade of the Georgia coast. Built in 1861 at Genesis Point, the fort was constructed on the plantation of Lieutenant Colonel Joseph Longworth McAllister, for whom it was named. Fort McAllister.

" Dec. 1864. Fort McAllister, built 1861-62 to close the Great Ogeechee River to enemy ships, mounted 11 siege [sic] guns, 12 field pieces and 1 10-inch mortar. Below it, piles and torpedoes obstructed the channel. As the Union forces neared Savannah, the fort´s capture became imperative in order that ships could pass up-river to supply them. Naval attempts having failed, Brig. Gen. So. B. Hazen´s Division, 15th Corps [Union], was ordered to cross the river, move to the fort, and take it from the rear. At dawn on the 13th, Hazen crossed at King´s Bridge, marched via ´Cross Roads´ (Richmond Hill) and Bryan Neck road (Ga 63), arriving about noon. At 4:45, after a difficult deployment, he assaulted the fort; by 5:00, his three brigades had swarmed over the works and overpowered individually Major Geo. W. Anderson´s small garrison of 230 Georgians who fought gallantly to the end. Gen. Sherman watched the assault from Dr. Cheves´ rice mill, 2 1/2 miles NNW across the river, after which he opened communications with Adm. Dahlgren´s fleet [Union], waiting in Ossabaw Sound.