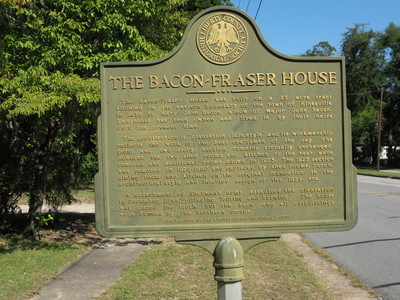 The Bacon-Fraser House is a historic home in Hinesville, Georgia in Liberty County, Georgia. It is marked with a historical marker. During the American Civil War, General Sherman's army occupied the plantation in 1864 and burned some of the outbuildings. This marker has been placed by the Liberty County Historical Society.

" The Bacon-Fraser House was built on a 23 acre tract situated on the eastern boundary of the town of Hinesville in 1839 by Mary Jane Bacon, widow of Major John Bacon. The house has been owned and lived in by their heirs until the present time.

The architecture is "plantation plain style" and its workmanship reflects the work of the best craftsman of the day. The front and two-story section remains virtually unchanged. However, the two shed rooms and kitchen to the rear were removed and additional rooms added in 1923. The 1923 section was removed in 1979-1980 and replaced by shed rooms, porch, dining room and kitchen on the original foundation in the architectural style and interior design of the 1839 era.

A detachment of Sherman's army assaulted the plantation in December 1864, pillaging, looting and burning. The house was spared the torch, but the barn and all outbuildings were burned by the Northern troups."