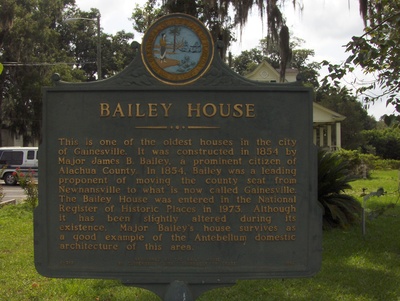 The Maj. James B. Bailey House (also known as Rest Haven) is a historic home in Gainesville, Florida, United States. It is located at 1121 Northwest 6th Street. On December 5, 1972, it was added to the U.S. National Register of Historic Places NRIS # 03000825.

The Bailey House is one of the few remaining pre-Civil War homes in Florida, Bowman said. It was built by slave labor between 1850 and 1854 and was the home of Maj. James B. Bailey and his wife, Mary, who was a teacher.

" This is one of the oldest houses in the city of Gainesville. It was constructed about 1850 by Major James B. Bailey, a prominent citizen of Alachua County. Bailey was a leading proponent of moving the county seat away from Newnansville to a new place, later known as Gainesville, part of which was to be located on his own plantation. The Bailey House was entered in the National Register of Historic Places in 1972. Although it has been slightly altered during its existence, Major Bailey's house survives as a good example of the Antebellum domestic architecture of this area."

It is sponsored by the Bailey House in cooperation with Department of State 1982. Presently it is the Bailey Retirement Center.